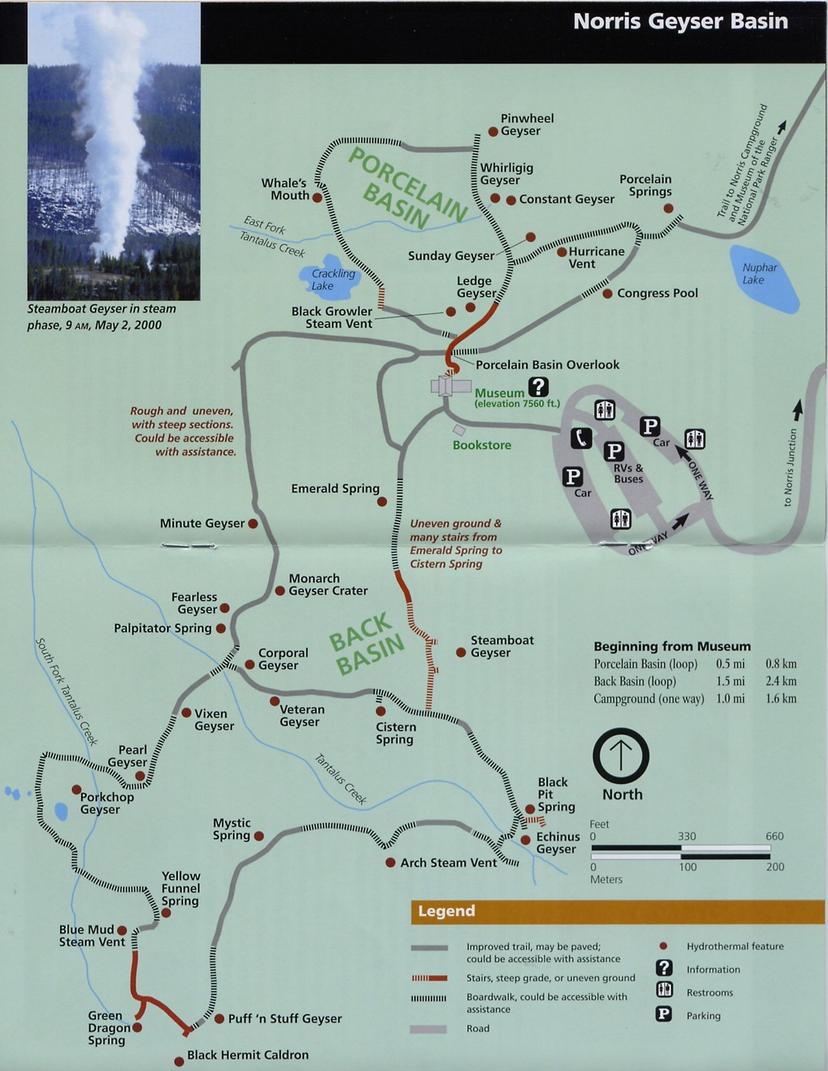 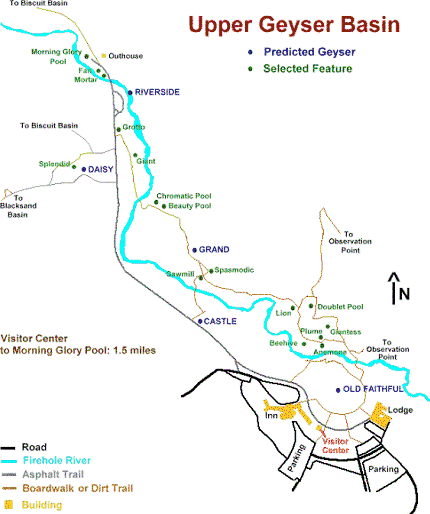 White Dome is a very old geyser as it's 20 foot high cone suggests. White Dome Geyser erupts from one of the largest cones in Yellowstone National Park, and eruptions occur through a 4 inch wide vent and reach heights of 30 feet. Intervals range from 15 minutes to 3 hours, so you must have either patience or luck to view an eruption from White Dome Gesyer. 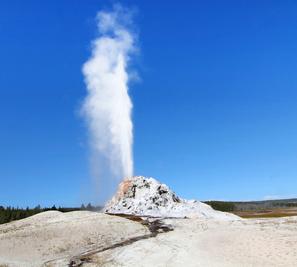 The world's tallest active geyser, Steamboat can erupt to more than 300 feet (90m), showering viewers with its mineral-rich waters. For hours following its rare 3 to 40 minute major eruptions, Steamboat thunders with powerful jets of steam. As befitting such an awesome event, full eruptions are entirely unpredictable. In recent years, Steamboat has had several major eruptions. More commonly, Steamboat has minor eruptions and ejects water in frequent bursts of 10 to 40 feet. 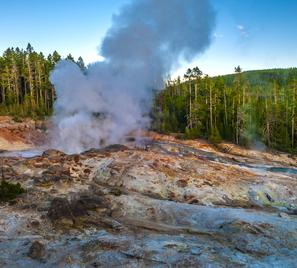 Situated on the bank of the Firehole River, Riverside Geyser is one of the most picturesque geysers in the park. During its 20-minute eruptions, a 75 foot (23m) column of water arches gracefully over the river. Eruptions are about 5-1/2 to 6-1/2 hours apart. There is water runoff over the edge of Riverside's cone for an hour or two before each eruption. Many geysers have similar "indications" that they are about to erupt. 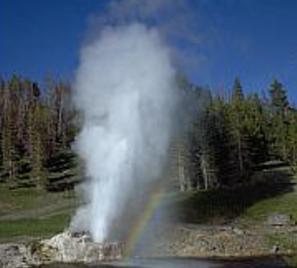 Plume Geyser erupts about every 20 minutes. Its 3 - 5 quick bursts can reach heights of 25 ft (8m). This is a relatively young geyser that came into existence when a steam explosion created its vent in 1922. In 1972 another steam explosion enlarged it's vent. This second steam explosion changed the shape of the eruption from a 40 foot plume to a still beautiful but shorter 20-25 foot burst. 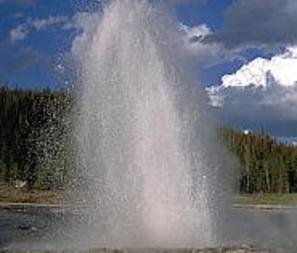 Lion Geyser is the main feature of the Lion Geyser Complex. It's eruptions issue from the largest cone of the group. Eruptions reach heights of 50 feet, but in 1988 an eruption reached 98 feet. Active phases normally occur each day. Eruptions of Lion Geyser last 1 - 7 minutes and are often preceded by sudden gushes of steam and a deep roaring sound, hence the name Lion. 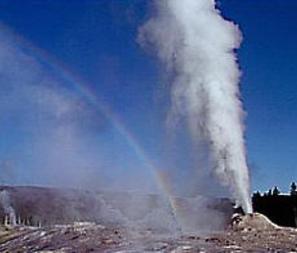 Jet Geyser is closely related to Fountain Geyser and is most frequent when Fountain is erupting. Jet erupts from at least 6 different vents, with the central one reaching heights of 20 feet. Eruptions can be expected every 7 to 30 minutes with the frequency increasing as the time for an eruption of Fountain Geyser approaches. 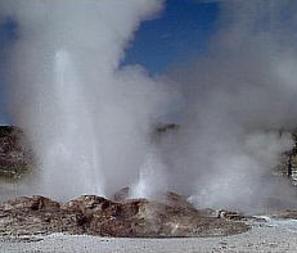 An eruption of Grand Geyser, the tallest predictable geyser in the world, occurs every 7 - 15 hours. A classic fountain geyser, Grand erupts from a large pool with powerful bursts rather than a steady column like Old Faithful. An average eruption lasts 9 - 12 minutes and consists of 1 - 4 bursts, sometimes reaching 200 feet (60m). It is easy to get confused when looking for Grand Geyser. The first thing most people notice is the large raised rim around nearby Turban Geyser and they miss the large flat pool just to the right of Turban. This large pool, with almost no rim, is Grand Geyser. 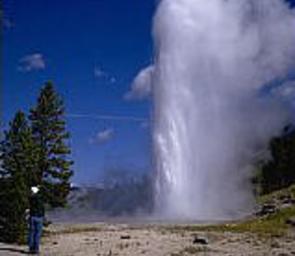 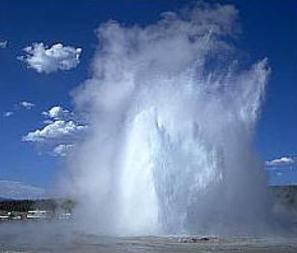 Fountain Geyser is a classic fountain type geyser, erupting from a pool of water and characterized by it's splashing action. This geyser is not easily predictable but has an average interval of around 11 hours. Its eruptions up to 75 feet (23 m) can last 30 minutes to more than an hour. 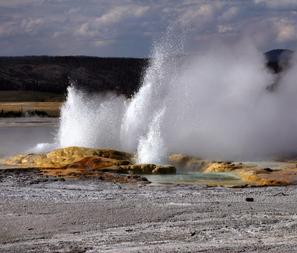 When active, its pool fills gradually with water;then suddenly, bursts of steam and water explode 40 to 60 feet (12 to 18 m) skyward. Echinus is the largest acid-water geyser known. Its waters are almost as acidic as vinegar with a pH ranging from 3.3 to 3.6. Acid geysers are extremely rare with the majority of the planet's total being found in Yellowstone's Norris Geyser Basin. 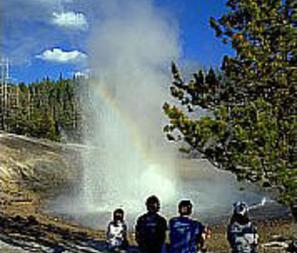 Cliff Geyser is located in the Black Sand Basin which is part of the Upper Geyser Basin. Eruptions are common but unpredictable. It's cliff like cone sits on the edge of Iron Spring Creek. 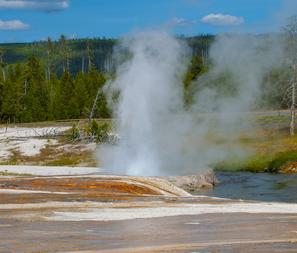 Clypsdera Geyser, located in the Lower Geyser Basin, is named after a Greek water clock. During the 1800's it's intervals were almost exactly 3 minutes. After the 1959 earthquake it entered what is known as a wild phase, erupting almost continuously. 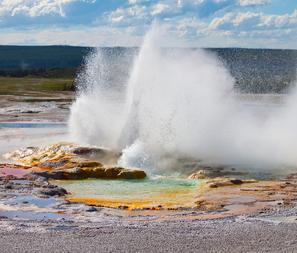 Castle Geyser has the largest cone and may be the oldest of all geysers in the basin. Estimates put the age of its 12 foot high cone at 5,000 to 15,000 years. Castle is currently erupting about every 10 - 12 hours. A water eruption frequently reaches 90 feet (27m) and lasts about 20 minutes. The water phase is followed by a noisy steam phase lasting 30 - 40 minutes.

Beehive Geyser is magnificent. Eruptions usually occur twice each day with displays lasting 4 - 5 minutes. During an eruption, the narrow cone acts like a nozzle, projecting the water column to heights of 130 - 190 ft (40 - 55m). The small geyser you see to the right of the main cone is Beehives indicator. It begins erupting around 20 minutes prior to a full eruption of Beehive. 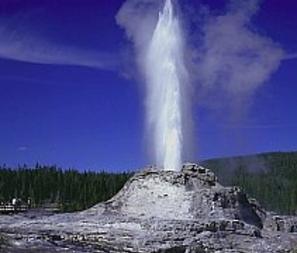 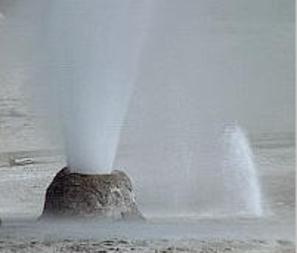 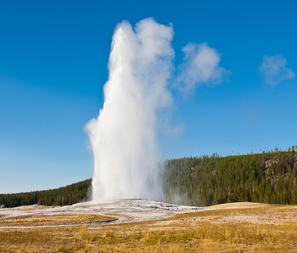 Scattered among the hot springs of Yellowstone National Park are the rarest fountains of all, the geysers. They are rare and distinguished from hot springs, because somewhere, usually near the surface in the plumbing system of a geyser, there are one or more constrictions.  Expanding steam bubbles generated from the rising hot water build up behind these constrictions, ultimately squeezing through the narrow passageways and forcing the water above to overflow from the geyser. The release of water at the surface prompts a sudden decline in pressure of the hotter waters at great depth, triggering a violent chain reaction of tremendous steam explosions in which the volume of rising, now boiling, water expands 1,500 times or more. This expanding body of boiling superheated water bursts into the sky as one of Yellowstone’s many famous geysers. There are more geysers in Yellowstone National Park than anywhere else on earth. Old Faithful, certainly the most famous geyser, is joined by numerous others big and small, named and unnamed. Though born of the same water and rock, what is enchanting is how differently they play in the sky. Riverside Geyser shoots at an angle across the Firehole River, often forming a rainbow in its mist. Castle erupts from a cone shaped like the ruins of a medieval castle. Grand Geyser explodes in a series of powerful bursts, towering above the surrounding trees. Echinus Geysers spouts up and out to all sides like a fireworks display of water. And Steamboat Geyser, the largest in the world, pulsates like a massive steam engine in a rare, but remarkably memorable eruption, reaching heights of 300 to 400 feet. This page includes more information about some of the better-known geysers in Yellowstone.  The major geyser basins in Yellowstone National Park include Norris, Upper, and Lower Geyser Basins.  Old Faithful is located in the Upper Gesyer Basin, and Steamboat (the world's largest geyser) is located in Norris Geyser Basin.  You don't have to wait until your next visit - view the Old Faithful Geyser Streaming Webcam now, courtesy of the National Park Service and Yellowstone Park Foundation.